The follow-up to 'Workout Holiday' is done and dusted 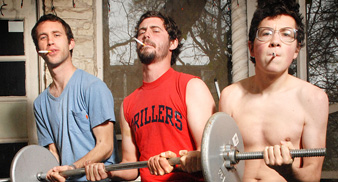 White Denim have confirmed that they’ve completed the writing and recording of their second album.

The as-yet-untitled follow-up to 2008’s “Workout Holiday” was recorded in drummer and producer Josh Block‘s trailer in Austin, Texas.

Speaking to BBC 6Music, Block said: “Actually, this is the our favourite thing that we’ve ever recorded. There’s some songs that are a little smoother but not in a bad way. We didn’t hire a producer and put reverb all over everything, so it’s not much of a change.”

The drummer also revealed that the band would love to collaborate with some of their heroes, saying: “If [John Cale] ever wanted to work with us for an affordable price I would love that. Or Robert Wyatt. Any of my heroes that are making music right now, that would be amazing, but we’ll see.”

White Denim‘s new album is expected to be released in the UK before summer 2009.