Welcome to the new Uncut 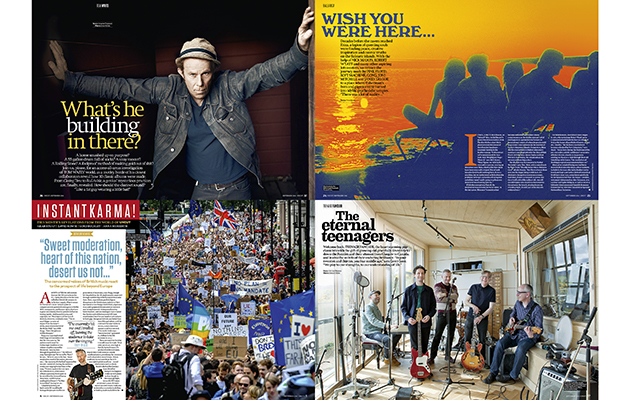 I guess many of us often turn to music as a consolatory balm, especially in times when chaos and anxiety engulf either our personal spaces or the broader world beyond. If you’re in need of that sort of thing this month – and given the past few weeks, I’d be surprised if you weren’t – it’s hugely heartening to welcome back Teenage Fanclub in the new issue of Uncut, which is officially out today (Tuesday July 26) in the UK.

The Fanclub’s music has soundtracked many good times I’ve had these past 25 years, and the way they’ve grown up with their audience, while retaining the ability to convey such warmth and joy in their music, is more cherishable than ever. “In your twenties and thirties, you fear middle age, you fear becoming older,” Gerry Love tells Michael Bonner for our lovely, in-depth feature. “Maybe you can fight it and try to stay as an eternal teenager. I like to think we play to our strengths, to our understanding of life.”

Teenage Fanclub are part of what I think might be one of my favourite Uncuts of 2016 thus far. Tom Waits is on the cover, and we’ve given him the treatment that worked so well for us with Van Morrison last year: namely, sending Graeme Thomson to interview Waits’ closest collaborators to find out how 10 of his best albums were made. From “Closing Time” to “Bad As Me”, we get a load of insights into the most mysterious of working practices, from Jerry Yester, Bones Howe, Carlos Guitarlos, Michael Blair, Ralph Carney, Marc Ribot, Tchad Blake, Charlie Musselwhite, Smokey Hormel, Colin Stetson, Augie Meyers and many more. A home smashed up on purpose? A 55-gallon drum full of sticks? A stray rooster? A foolproof method of making gold out of shit? It’s all here, plus some revelations about Waits family life from his cousin, violinist Dawn Harms.

We’ve also got a deep and weird interview with Cass McCombs (who’s on the free CD along with TFC, Ryley Walker, Hans Chew, Dinosaur Jr, Factory Floor, Scott Hirsch and even an unheard Judy Henske/Jerry Yester track), pieces on De La Soul and Aaron Neville, Tom Petty getting his old gang, Mudcrutch, back together again, and an amazing holiday read by Peter Watts, in which he tells the story of how a generation of questing souls found their way to the Balearic Islands. Decades before the ravers reached Ibiza, Pink Floyd, Soft Machine, Gong, Joni Mitchell and James Taylor were hunting for peace, creative inspiration and cosmic truths there and Formentera. With the help of Nick Mason, Robert Wyatt among other aspiring lotus-eaters, Pete returns to a place where fishermen’s huts and pigsties were turned into idyllic psychedelic temples. “There was a lot of nudity…”

Beyond such escapism, we’ve also felt it necessary to address the current situation in the UK post-Brexit, and how the concerned voices of British music are reacting to the prospect of life beyond the EU. “Cynicism is the enemy of all of us who want to make the world a better place,” Billy Bragg tells Laura Snapes, “and the best antidote to that is activism. Songs can’t change the world, only the audience can do that…”