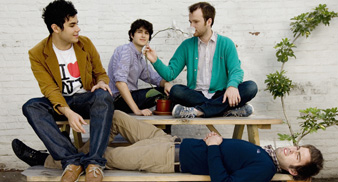 Vampire Weekend performed the first of their three gigs at this year’s Glastonbury Festival today (June 27).

The New York four-piece took to the Other Stage this afternoon and seemed considerably awed by the turnout.

Addressing the crowd, frontman Ezra Koenig said: “I can’t believe how many people we’re looking at. It’s such a beautiful sight, we’re really honoured to be back in your country.”

The group are set to play on the John Peel Stage tomorrow (June 28).