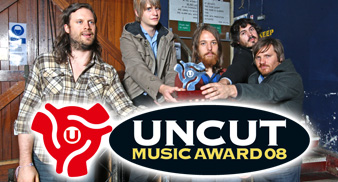 Finally, after much deliberation, Uncut is proud to announce that Fleet Foxes have scooped our first ever Uncut Music Award!

The Seattle quintet’s eponymous debut album beat off competition from a shortlist which included Mercury Music Prize winners Elbow and Radiohead, as well as your, the readers, choice of Drive-By Truckers for the “most rewarding and inspiring album” of the past 12 months.

Fleet Foxes were unanimously hailed by a panel of industry judges which included broadcaster Mark Radcliffe and ex EMI chief executive Tony Wadsworth, at a judging session in November to choose the overall winner from eight shortlisted albums.

The band’s singer Robin Pecknold told Uncut: “It’s awesome. It’s crazy, I never expected to be in contention for this kind of thing. It makes us want to step up our game. I see it as you throwing down the gauntlet – now we have to live up to it. Obviously prizes are not something you should think about or hope for when you’re making music. I hope our next album isn’t like an awards grab, like the equivalent of a Clint Eastwood movie, y’know, Oscar bait. If we set out to try and win album of the year, we’ll end up sounding like Coldplay or something.”

Mark Radcliffe said of the Fleet Foxes album: “I think it’s an extraordinary piece of work, and a worthy first winner of the prize. It’s a beautiful vocal creation, a record that seems to have echoes of all kinds of indigenous American music, but also African music and even medieval strains. All the songs on the album are absolutely brilliant, and it just has a magical, ethereal quality.”

Over the next fortnight Uncut will be posting blow-by-blow transcripts of the ‘discussions’ which took place behind closed doors at the judging session this month. Find out what’s really questioned when albums go up for a prize. We will be posting what was said about each of the shortlisted albums at the Uncut Music Award blog here, starting today (November 12).

The full shortlist, in alphabetical order, was: