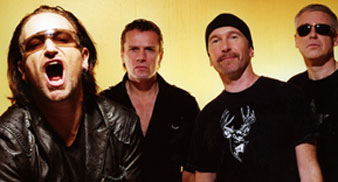 U2 wished Bob Dylan a happy 70th birthday during their 360° tour show in Salt Lake City last night (May 24).

The band performed a rare rendition of ‘Love Rescue Me’ from their 1998 album ‘Rattle And Hum’ at the Rice-Eccles Stadium, a track Dylan co-wrote. Bono then wished the folk legend many happy returns with the help of the crowd.

Watch footage of the singer paying tribute to Dylan by clicking below.

Later in the show Bono threw snippets of Dylan classics ‘Times They Are A-Changin’ and Blowin’ In The Wind’ into ‘Where The Streets Have No Name’ into the setlist.

U2 were among a host of stars who paid tribute to Dylan on his big day yesterday, with Arcade Fire, Kings Of Leon, Slash and My Chemical Romance among those offering their best wishes to him.