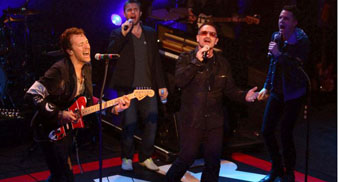 War Child got two of the biggest bands in the world, Coldplay and The Killers to play an intimate show at the O2 Shepherd’s Bush Empire after the BRIT Awards on Wednesday night (February 18).

U2’s Bono and Take That’s Gary Barlow also made surprise guest appearances for the shows encore at 1.30am, both of them singing on The Killers track “All These Things That I’ve Done”, with both Coldplay and The Killers onstage.
Bono sang a part of the verse and the lines “I’ve got soul, but I’m not a soldier.”

Earlier on Chris Martin had welcomed Barlow on stage to sing “Back For Good” saying: “Shall we welcome the greatest comeback kid of all time?”, adding “The band to see at the moment is Take That. We’ve just had a really bad day. Didn’t win anything at the Brits and we’ve just come back from Japan,” referencing Coldplays four unwon BRIT nominations.

The Verve’s Richard Ashcroft, Courtney Love, Pet Shop Boys and Natalie Imbruglia were some of the other artists watching the show from the intimate venue’s balcony.