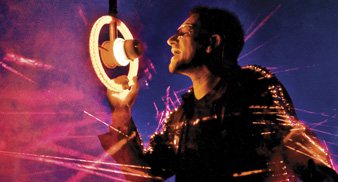 U2 frontman Bono has revealed that Danger Mouse is working on their forthcoming album.

The record, which is tentatively titled ‘Songs Of Ascent’ and is [url=http://www.nme.com/news/u2/53482]due out next year according to the band’s manager Paul McGuinness [/url], has been produced by the Gnarls Barkley and Broken Bells man, otherwise known as Brian Burton.

“We have about 12 songs with him,” Bono told Theage.com. “At the moment that looks like the album we will put out next, because it’s just happening so easily.”

The singer also revealed that the band are currently working on two other albums, the first of which is a “club” record featuring Lady Gaga collaborator RedOne, Black Eyed Peas‘ Will.i.am and David Guetta.

“U2‘s remixes in the 1990s were a real treasure,” he said. “So we wanted to make a club sounding record. We have a pile of songs.”

The band are also hoping to make a concept album based on songs Bono and guitarist The Edge have written for their Spider-Man musical, [url=http://www.nme.com/news/faithless–2/52501]which opens on Broadway next month[/url].

“We haven’t convinced the rest of the band to do that yet,” added the singer. “[Drummer] Larry [Mullen Jr] definitely has a raised eyebrow.”