U2 Have New York Street Named After Them 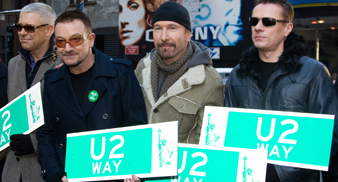 Celebrating the release of U2‘s twelth album release ‘No Line On The Horizon’, New York Mayor Michael Bloomberg has temporarily remaned the city’s West 53rd Street as ‘U2 Way’.

A ceremony to rename the street took place in Manhattan on Tuesday (March 3) where U2 have been recording at the The Late Show With David Letterman studio every night this week.

Speaking to a Reuters news reporter singer Bono quipped: “The Beatles had Penny Lane, Elvis lived on the end of Lonely Street. We’re here somewhere between 10th Avenue and funky, funky Broadway, somewhere south of Duke Ellington Way and north of Joey Ramone Place we find ourselves … where the streets have no name.”