Musician teaming up with members of Liturgy and Oneida for LP 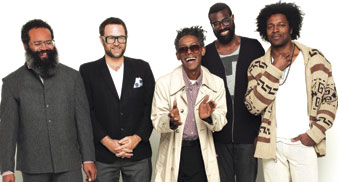 TV On The Radio‘s Kyp Malone has recorded an album in support of the Occupy Wall Street movement.

The Village Voice claims that Malone has teamed up with former Liturgy drummer Greg Fox and Oneida‘s Kid Millions to make the LP, with the proceeds set to be donated to the Occupy protest.

Fox – who played his last show with the black metal band last month – revealed that although he didn’t join in with the occupation of Zuccotti Park as it wasn’t “really my thing”, he had worked in the kitchen and served food to the protesters.

He also said that he, Kid Millions and Malone had begun recording together several weeks before the occupiers were moved on and planned to record a whole album, with the sessions starting out as a four-hour jam session. “We knew to some degree what the end product would be, and we just started playing,” he said.

Earlier this month, a host of musicians including Lou Reed and Tom Morello of Rage Against The Machine launched a website to support the Occupy Wall Street movement.

Occupymusicians.com, which has also garnered support from the likes of Sonic Youth and Sharon Van Etten, will “serve as a resource to facilitate performances at Occupy spaces and events”. Musicians as well as “sound engineers, sound artists, producers DJs, producers, instrumentalists, composers, lyricists” are being invited to sign up and show their support of the movement.

On November 9, meanwhile, Morello and Billy Bragg played unannounced acoustic sets at the Occupy London protests at St Paul’s Cathedral, with the Rage Against The Machine guitarist telling the crowd: “The people that own and control this world don’t deserve to. I have a message for them, the beginning is near. History isn’t made by CIA men running dope or by old men. It is made by people.”