The band will play the Soho Theatre in February next year 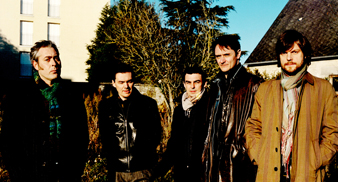 Tindersticks are set to play a four-night residency at London’s Soho Theatre in February 2012.

The shows, which will run from February 22-25, will support the release of the cult indie band’s forthcoming new album ‘The Something Rain’, which is released on February 20. The band will be performing songs from the new record as well as some ‘live favourites’.

As well as playing four evening shows in the Dean Street space, there will be two late night acoustic performances in the venue’s cabaret room, Soho Downstairs on February 24 and 25.

Scroll down to watch a short film shot in the Tindersticks‘ Le Chien Chanceux Studio. The footage is soundtracked by a track from their forthcoming album, ‘Medicine’. ‘The Something Rain’ will be released on the band’s own Lucky Dog label.

Tindersticks will be co-headlining next year’s End of the Road Festival with Grizzly Bear over the weekend of August 31-September 2.

To check the availability of [url=http://www.seetickets.com/see/event.asp?artist=tindersticks&filler1=see&filler3=id1nmestory]Tindersticks tickets[/url] and get all the latest listings, go to [url=http://www.nme.com/gigs]NME.COM/TICKETS[/url] now, or call [B]0871 230 1094[/B].