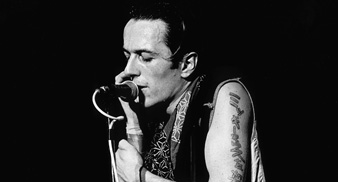 Tim Burgess of The Charlatans, Billy Bragg and Creation Records founder Alan McGee have all paid tribute to Joe Strummer on the 9th anniversary of his death.

The Clash frontman died on December 22, 2002 from an undiagnosed congenital heart defect. He was 50.

Tim Burgess took to Twitter to link to The 101ers track ‘Keys To Your Heart’. The 101ers were Strummer’s band before The Clash. Burgess also wrote: “9 years since the untimely death of Joe Strummer… a true maverick & brilliant frontman.” On Facebook, Billy Bragg wrote: “Today we remember our brother Joe Strummer, who died on this day in 2002. The music he made still resonates. As London burned this summer, his words came to mind “White youth, black youth, better find another solution. Why not phone up Robin Hood and ask him for some wealth distribution?””

Writing for the Huffington Post, Alan McGee said: “Long may you rock and roll, Joe Strummer. Forever missed and loved by Clash fans worldwide and he always will be. Long may you run…”. He added: “Apart from Elvis or Lennon, nobody has ever been that cool again in rock’n’roll.”

Strummer’s old Clash bandmate Mick Jones recently remembered him during an interview with Sabotage Times, saying: “Joe is with me all the time you know… I can feel him in so many ways, its something that’s with me a lot of the time.”