Jack White, The National, Steve Winwood and Van Morrison all feature in our new issue 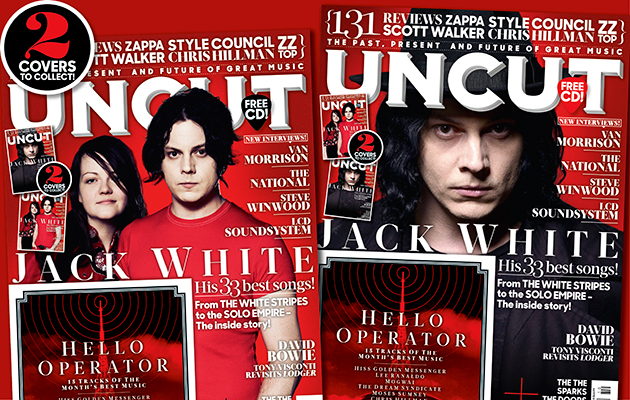 Jack White, The National, Steve Winwood and Van Morrison all appear in the new issue of Uncut, dated October 2017 and in shops from August 17.

White is on the cover, and inside we chart his 33 best songs, from The White Stripes to The Raconteurs, solo and more. Plus, we take a look inside his extraordinary Third Man empire.

After various side projects, The National have returned with Sleep Well Beast, and Uncut heads to Paris to discover just how the band – now scattered across the world – managed to put together their seventh album. “There’s always a sense in the band where we’re not sure we’re going to make a record or even if we should continue,” says Bryce Dessner. “I said to my brother, ‘I don’t want to do this if we’re not doing something different.’”

Steve Winwood meets Uncut to take us through his storied history, from his new live album to his days with Traffic, the Spencer Davis Group and Blind Faith, not to mention jamming with Jimi Hendrix: “I think Hendrix came up through music in some ways a similar route to me,” he explains. “He learnt a lot of the old skills. He had to learn all that stuff, it wasn’t like he just got up one morning and thought, ‘I climbed on the back of a giant dragonfly’, he’d done all that stuff and played all those songs and understood all that music.”

Uncut also sits down with Van Morrison for an extensive, candid and not-altogether even-tempered chat about his new album, Astral Weeks and “fake news”. “I don’t enjoy making albums any more,” he tells us.

As they ready their first album in nearly 30 years, we catch up with The Dream Syndicate, while Sparks take us through the making of their best nine albums, from Halfnelson to the new Hippopotamus.

The The‘s Matt Johnson answers your questions in our An Audience With… feature, while the surviving Doors recall how they made “Light My Fire”.

Elsewhere, Sonic Youth’s Lee Ranaldo reveals the records that shaped his life, from The Beatles to Talking Heads and Ornette Coleman, while Tony Visconti details his new mix of David Bowie‘s Lodger, we meet Peter Buck and Corin Tucker‘s new band Filthy Friends, and get the lowdown on Alan Vega‘s new, posthumous album.

This issue’s free CD, Hello Operator, features the best of this month’s music, with songs from Mogwai, Hiss Golden Messenger, Lee Ranaldo, The Dream Syndicate, Wand, The Clientele and more.

The new Uncut is out on August 17.