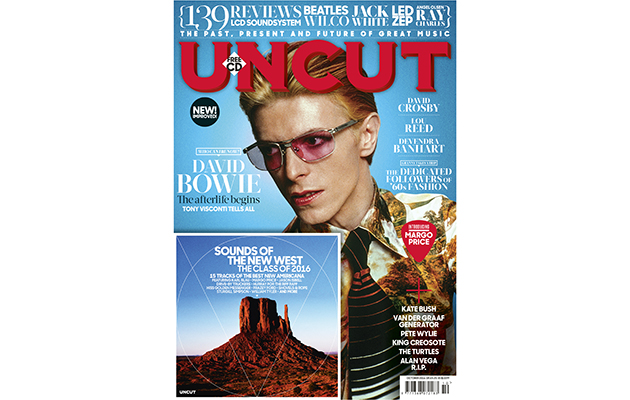 David Bowie, Lou Reed, David Crosby and Margo Price all feature in the new issue of Uncut, dated October 2016 and out now.

Bowie is on the cover, and inside, Tony Visconti takes us on a trip into the archives, as Bowie’s lost album, The Gouster, is unveiled 42 years late. Plus, what’s next in the great man’s afterlife?

“David is very quick in the studio,” explains Visconti. “He works out things the night before, he’ll scribble things on a piece of paper, then we get it very quickly. The reason for that is he hires the best people.”

Uncut discovers the harrowing story behind Lou Reed‘s “offensive” 1977 masterpiece, Street Hassle, a tale involving whisky, speed and replica human heads. “That studio was a sight to be seen,” says guitarist Ritchie Fliegler. “You had your amp, but instead of a microphone in front, there were… heads. Heads on sticks. It looked like Vlad The Impaler was making a record with his victims.”

Elsewhere, David Crosby – returning with a new album, Lighthouse, in October – discusses the evils of Desert Trip, endorsements from the Vatican, how Miles Davis discovered The Byrds, and how he’s ready to go into battle with CSNY against Donald Trump. “I’m a bozo, man!” he tells us.

Uncut heads out on a Nashville bar crawl with Margo Price, the runaway country success story of 2016, to discover how hard times and personal tragedy led to her album Midwest Farmer’s Daughter. “My first 27 years weren’t a walk in the park,” she says, “so I look at the positives.”

We also explore the strange story of Granny Takes A Trip, and how a gang of psychedelic tailors and shopkeepers changed the look and culture of 1960s London – Marianne Faithfull, Kenney Jones, Joe Boyd, Neil Innes, Granny’s founder Nigel Waymouth and more reveal all. “We were one of the first [boutiques],” says John Pearse, Waymouth’s partner in the store. “I guess it was a time when everything seemed possible – and it was possible, because we made it happen.”

The Turtles recall the creation of their US No 1 hit “Happy Together”, while Van Der Graaf Generator look back on the greatest albums of their career – “From the outside we must’ve looked mad!”

LCD Soundsystem and Frazey Ford are reviewed live, and we catch the new documentary on The Beatles‘ touring years, alongside a host of other DVDs, Blu-rays and films.

Sounds Of The New West: The Class Of 2016, free on the front of this issue, continues our run of Americana CDs, and features the finest modern talents – from Margo Price to Karl Blau, Jason Isbell to Hiss Golden Messenger, William Tyler to Shovels & Rope.