What's inside the new issue… 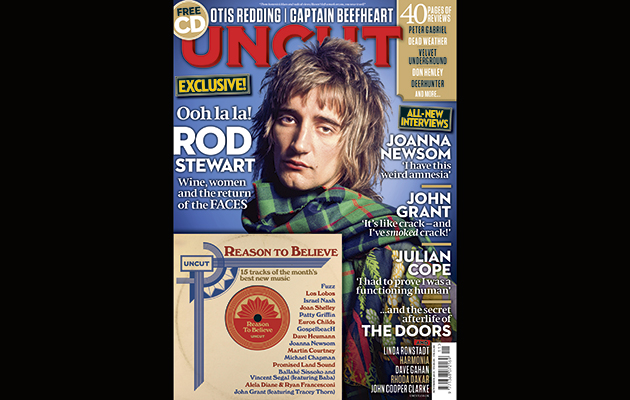 Rod Stewart, Joanna Newsom, John Grant and The Doors all feature in the new issue of Uncut, out on September 22.

In our cover feature, we visit Rod in Los Angeles on the eve of his new album and the Faces reunion, and discover why he was never much of a natural songwriter.

“I was too busy – as I said in my autobiography – having a good time,” he says. “I couldn’t be bothered to sit down and write songs, especially in the early ’70s. In the Faces, you literally had to lock me in a room to get the lyrics finished. Now, with the coming of age and with a few stories to tell, it’s a luxury. I love it. Now, when I’m not making an album, I miss it. But yeah, it was like being at school for me.”

Joanna Newsom also invites Uncut into her LA home, to discuss her new album Divers, four years in the making. “I took time off to do the movie [Inherent Vice],” she says. “It did maybe defer some of my music work for a while. But it was totally worth it. What really happened is I spent four years in this suspended state of agitation, waiting for things to make sense. But then it was just sustained, slow work.”

John Grant answers questions from fans and collaborators, taking on topics such as The Czars, Elton John, Sinéad O’Connor and his current vices. “The Coke Zero, and there’s a chocolate from Green & Black’s, Sea Salt,” he reveals. “It’s a blue packaging. Oh God, the No 1 thing, which I can’t get my hands on very often – luckily – is this stuff made in Norway, Smash! It’s just insane. Do you know what Bugels are? They’re cone-shaped corn crisps that’ve been around for decades. So they’re Bugels covered in milk chocolate and salt. And you just cannot believe, I mean, it’s like crack. For real. And I’ve smoked crack, so I’m telling you, man.”

With the help of John Densmore, Robby Krieger, Bruce Botnick and more, Uncut looks into the strange tale of what The Doors did after Jim Morrison‘s death – namely, two albums, now reissued. “You needed three stable guys to balance Dionysus,” says Densmore, recalling their relationship with Morrison. But after his death, who could replace a frontman of such terrifyingly “strong energy”? Paul Rodgers? Kevin Coyne? Joe Cocker? Paul McCartney?

Elsewhere, Julian Cope remembers the making of his first two solo albums, World Shut Your Mouth and Fried, and a period that included Mars Bars, suppository-sized speed pills and a giant turtleshell… ““It was ridiculous,” he tells us. “But at least it was valiantly ridiculous.”

On a similarly cosmic trip, Harmonia recall the making of their only single, “Deluxe (Immer Wieder)”, and their members’ work with Neu!, Cluster, Kraftwerk and Brian Eno.

Friends and collaborators remember the great soul singer Otis Redding and his classic Otis Blue album – “He was a whirlwind of a guy,” they say; Linda Ronstadt takes us through her greatest albums including her work with the Eagles and Neil Young; and Depeche Mode‘s Dave Gahan reveals the albums that have shaped his life.

Films and DVDs previewed this month include Rubble Kings and The Lobster, while End Of The Road festival is reviewed in our live section.