Paul McCartney, Keith Richards and Kurt Vile are all in the new issue 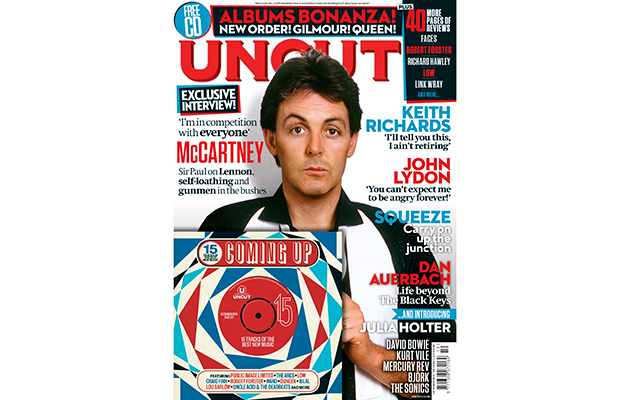 Paul McCartney, Keith Richards, Kurt Vile and John Lydon are all in the new issue of Uncut, dated October 2015 and out on August 25.

McCartney is on the cover, and inside he discusses his old Beatles songwriting partner, John Lennon, George Harrison‘s “late blooming” talent, the upcoming reissues of his ’80s hits Tug Of War and Pipes Of Peace, and how he learned to “block the shit”.

“When I think of John, I think of us writing together,” says McCartney. “‘A Day In The Life’… stuff like that.”

Keith Richards talks about his new solo album, Crosseyed Heart, his first LP under his own name in 23 years, and the future – “I tell you this, I ain’t retiring,” he says.

Ahead of the release of his new album, B’lieve I’m Goin’ Down…, Kurt Vile takes us through his career in albums, from God Is Saying This To You and The War On Drugs’ Wagonwheel Blues, to his own Smoke Ring For My Halo and his latest effort.

Uncut also meet John Lydon, the self-proclaimed king of punk, at his Malibu home and discover that he’s matured with age. Subjects under discussion include a Sex Pistols perfume range, his thoughts on David Cameron’s Britain and just what he intends to do with his body after he dies – “It’s very easy to be bitter and twisted,” he confesses.

Elsewhere, Dan Auerbach answers your questions on Akron, working with Dr John, stepping on Neil Young‘s foot and his new band, The Arcs. “We worked on The Black Keys every single day. Relentless. I treat music like it’s a job.”

Mercury Rev discuss the making of their Deserter’s Songs highlight, “Opus 40”, inspired by the Catskill Mountains and energised by The Band‘s Levon Helm.

We’re also in Los Angeles’ Echo Park for a trip with radical, mystical songwriter Julia Holter, and a look inside her fantastic new album, Have You In My Wilderness. We also chat to Squeeze cool cats Chris Difford, Glenn Tilbrook and co about their remarkable London story… involving both sweetshops and cop shops.

In the reviews section, we look at new albums from Low, Keith Richards, New Order, Robert Forster, David Gilmour and Mercury Rev, archive releases from Queen, Link Wray and the Faces, and DVDs and films on Wilco, NWA and Alejandro Jodorowsky. Live, we catch gigs from Björk and The Sonics.

Beirut‘s Zach Condon takes us through his life in records, while David Bowie, Roger Waters, Richard Farina and Uncle Acid & The Deadbeats all feature in our front section.

You can also buy Uncut digitally by clicking here.