Inside our brand new August 2015 issue… 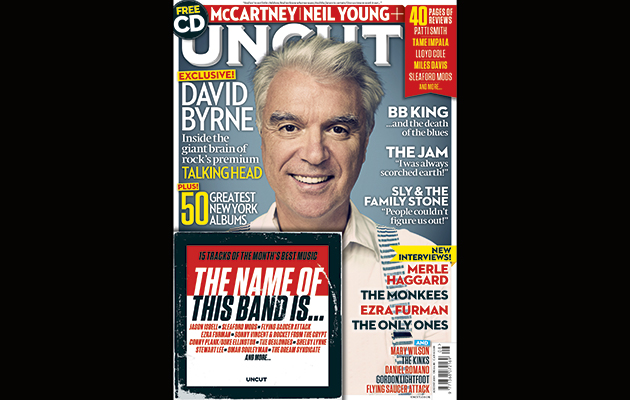 David Byrne, BB King, The Jam and Sly & The Family Stone all feature in the new issue of Uncut, dated August 2015 on sale in UK shops and available to download now.

The former Talking Heads mastermind is on the cover, and inside Byrne takes us through his long career, his work with Brian Eno and St Vincent, the Meltdown festival he’s curating in London this summer, and how he accidentally invented hip-hop.

“There was this temptation to really get into the pop machine and take it to the next level of pop arenas,” Byrne says, recalling the late ’80s when Talking Heads began scoring significant hits, “and you start building up this huge infrastructure which you then have to write and record to support.

“I sensed losing some freedom there, as regards what I can do; and I like too much being able to do all of those different sorts of things.”

Uncut salutes BB King and examines whether the blues that the guitarist helped to invent is facing extinction itself. “Right now, the blues isn’t cool to the young,” Paul Puccioni tells us.

On the eve of a major exhibition about The Jam, Paul Weller talks us through the rare exhibits on show, much of it collected by Weller’s own family.

“I didn’t keep anything,” he admits cheerfully. “I used to destroy my notebooks after every record, burn them or rip them up. I was always scorched earth, almost ceremonial. It’s been and done.”

Elsewhere, we investigate the early days of psych-funk genius Sly Stone, and the Family Stone, as a boxset of their epochal Fillmore East shows from 1968 emerges. “Sly Stone reinvented pop music in his own image,” says the Family Stone’s Cynthia Robinson.

Merle Haggard answers your questions, and queries from famous fans, in our Audience With… feature this month. “I’m thankful for the life I’ve been given,” the Bakersfield Bard tells us.

Peter Perrett and the rest of The Only Ones recall the creation of their cosmic classic “Another Girl, Another Planet”, a story taking in charisma, double-drum feats and various addictions. “At the time, I was more addicted to sex…” says Perrett today.

The Monkees take us through their career, album by album, from their self-titled debut, through mind-bending, psychedelic soundtrack Head, right up to 1996’s Justus.

“We were essentially a garage band,” says Micky Dolenz. “Even on the television show, remember, we never made it… it was that struggle for success that was so important, and I think that’s what made it so endearing to so many kids around the world.”

Elsewhere, The Supremes’ Mary Wilson details her life in records, we look at a new exhibition on The Kinks, examine the return of David Pearce and Flying Saucer Attack, and speak to Gordon Lightfoot about his “beneficial” emotional stress.

In the reviews section, albums by Tame Impala, Jason Isbell, Sleaford Mods, Neil Young, Fraser A Gorman, Lloyd Cole, Miles Davis and The Dream Syndicate are all reviewed, along with gigs by Paul McCartney and Patti Smith, as well as films on The Damned, Wilko Johnson and Amy Winehouse.