Arctic Monkeys, Kate Bush, Warren Zevon and Neil Young all feature in the new issue of Uncut, dated June 2014 and out now. 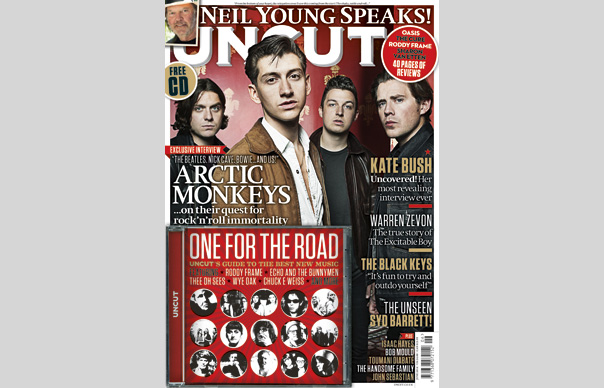 Arctic Monkeys, Kate Bush, Warren Zevon and Neil Young all feature in the new issue of Uncut, dated June 2014 and out now.

Alex Turner and co discuss their past, their future and their place in the rock’n’roll pantheon, in our cover story.

The group also reveal their intentions behind that famous Brit awards speech, and about what’s on their iPods, while John Cooper Clarke and Attractions drummer Pete Thomas explain what it was like working with the Monkeys.

Neil Young speaks to Uncut about his plans for the coming year, working with Jack White and Archives 2, while friends, bandmates and collaborators remember how Warren Zevon battled a gangster father, alcoholism, drugs and guns to write some of the greatest songs of our time.

As Kate Bush plans her return to the live stage, we delve back to 1989 for a full, revelatory interview in which Bush divulges the secrets of her Sensual World.

Bob Mould answers your questions about Hüsker Dü, the joys of motorway service stations, professional wrestling and coming out in public, while we look at the extraordinary life of revolutionary soul star Isaac Hayes.

Toumani & Sidiki Diabaté receive Uncut in Mali to talk about their new album, their country’s storied musical history and the religious war dividing their homeland, while comedian, actor and musician Matt Berry reveals the albums that have soundtracked his life.

The Handsome Family recall the making of their True Detective-soundtracking masterpiece “Far From Any Road”, while John Sebastian looks back over the greatest albums of his career, Lovin’ Spoonful, solo work and more.

The Black Keys discuss the making of their new album Turn Blue, while the record is reviewed in our epic, 39-page reviews section, alongside new releases from Roddy Frame, Sharon Van Etten, Swans and more, while archive releases from XTC, Grace Jones, Oasis and Wreckless Eric are also reviewed.

Films and DVDs including Gruff Rhys’ American Interior, The Canyons and Blue Rain are also reviewed, along with live shows from The Cure and Wild Beasts, and a star-studded tribute to William Onyeabor.

The issue also comes with a free CD, One For The Road, featuring tracks from Echo & The Bunnymen, Roddy Frame, Thee Oh Sees, Toumani & Sidiki Diabaté, Chuck E Weiss, Wye Oak and Liz Green, among others.