Rockers line up 12 dates in January and February next year 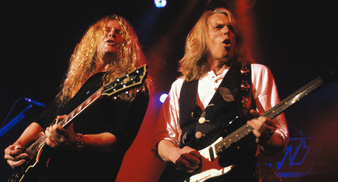 Thin Lizzy have announced a UK tour for early next year.

The legendary rockers, who now feature singer Ricky Warwick, former frontman of The Almighty, will play 12 dates in January and February.

The tour begins at Glasgow‘s Barrowlands on January 19 and runs until February 4, when the band headline London‘s HMV Hammersmith Apollo. Support on all dates will come from US metallers Clutch.

The band, who have not released a studio album since 1983’s ‘Thunder And Lightning’, indicated earlier this year that they are considering recording new material together. Were this to happen, it would mark the first new musicl the band had released since the death of frontman Phil Lynott in 1986.