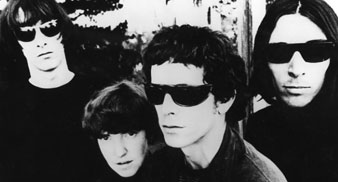 The Velvet Underground‘s Lou Reed, Moe Tucker and Doug Yule all shared a stage together in New York on Tuesday (December 8), answering questions about the band’s history in front of a live audience.

The talk, which was not attended by John Cale, took place at the New York Public Library, and saw Reed pay personal tribute to Tucker and the band’s mentor Andy Warhol.

“Warhol was one of the greatest people I’ve ever met in my life,” Reed said of the pop art impresario. “Without him, [The Velvet Underground were] kind of inconceivable. When they hired us to make a record it wasn’t because of us it was because of him. They didn’t know us – they thought he was the lead guitarist or something!”

Reed added that he’s searched for a drummer with Tucker‘s style throughout his post-Velvets career, but that nobody can match her, reports BBC Radio 4’s Today Programme.

“I’ve tried since then to get a drummer to do what she did, and it’s impossible. They can’t. If we sped up, she sped up. Instead of having a drummer who’ll sit there trying to hold the beat down, our songs speed up and slow down all over the place.”