The Ultimate Music Guide to The Beach Boys 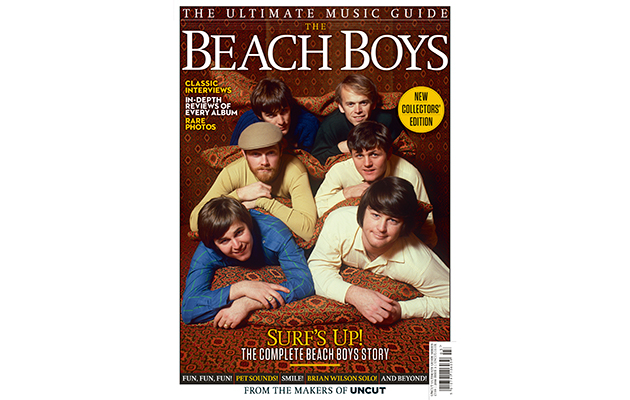 In our brand new Ultimate Music Guide to The Beach Boys (on sale in the UK on Thursday, but it’ll be available to buy from our online shop soon), there’s an amazing interview with Brian Wilson plucked from a March 1966 edition of NME. The Beach Boys are away on tour, as usual, but Wilson is at home in Beverley Hills, talking about how his music fits into a world populated by The Beatles and The Byrds, by Bob Dylan and Phil Spector. In two months, he will release a new Beach Boys album, “Pet Sounds”; one that will showcase how his group have “evolved another 800 per cent in the last year.”

“We have a more conscious, arty production now that’s more polished,” he continues. “It’s all been like an explosion for us. I don’t go out on the tours at all now. I just work on production. I’ve spent five months working on this new album and I think this album and the batch of new singles I’ve been working on, well, it’s like I’m right in the golden era of what it’s all about. It’s all just coming out like breathing now.”

Fifty years on, Wilson’s words seem uncannily loaded with vision and pathos. In the intervening half-century, his own mental and physical health has been elevated to the status of public spectacle; an epic drama which, at its most ambitious, seeks to understand the relationship between creative genius and psychological turmoil. His band, meanwhile, have steered their own unsteady course; from triumphs like “Surf’s Up” and “Holland”, to the farces of the 1980s and ’90s.

There have been tragic losses, labyrinthine lawsuits and belligerent challenges. “The Beach Boys did about 180 performances last year. I’d like to see the Mop Tops match that,” Mike Love announced when his band were inducted into the Rock And Roll Hall Of Fame, alongside The Beatles, in 1988. Mick Jagger, he continued, has “always been chickenshit to get on stage with the Beach Boys.” Seven years later, a tentatively recovering Brian Wilson played his own piano version of “Satisfaction” to me, and followed it up with a sublime new take on one of his earliest classics. “If you put ‘Surfer Girl’ on the radio, I’ll give you 100 bucks,” he said, before deciding that his estranged bandmates were “assholes. I oughta beat the hell out of them all.”

None of this, though, can detract from the vigour, poignancy and enduring glory of the Beach Boys’ finest music. This year, “Pet Sounds” turns 50, and has already been acclaimed once more by Uncut as the greatest album ever (we also, I can now cautiously reveal, pay a visit to his Beverly Hills mansion for an exclusive new interview in the next issue of Uncut itself). As Brian Wilson performs that incredible suite of songs on tour for one final time, it seems the perfect opportunity to put together an Ultimate Music Guide celebrating The Beach Boys. There are in-depth new reviews of every single one of the band’s albums, and revelatory interviews that have been lost in the NME and Melody Maker archives for decades. Dennis nearly has his leg yanked off. Mike wants to send edible records to China. Brian wonders whether Phil Spector lives with Paul McCartney and, eventually, reveals the key to how he functions.

“The secret,” he tells me in 1995, sat at the piano in his front room, “is abstaining from orgasm. An Einsteinian formula that if you abstain from having an orgasm for, say, 10 years, you create a void in your brain.… Ain’t that a weird trip?”