White Lies and more added to this July's event! 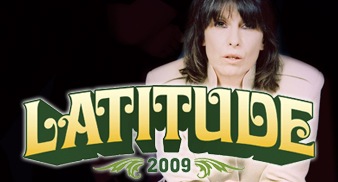 The Pretenders are one of the latest additions to the bill for this year’s Latitude Festival which takes place from July 16- 19 in Southwold in Suffolk.

Chrissie Hynde and co. will play from their nine-album back catologue, including hits “I’ll Stand By You” and “Back On The Chain Gang”. They will play the Obelisk Arena on Friday July 17.

Also added to the Obelisk billing are White Lies, the Brits who scored a number one with their debut album ‘To Lose My Life’ in January and have since been in huge demand for live performances. The band return to Latitude’s main stage graduating from being last year’s opening act on the same stage.

Latitude, now in it’s fourth year is also jam packed with even more theatre, dance, comedy and poetry than ever before.

Sadler’s Wells, the Royal Opera House, National Theatre, Royal Shakespeare Company, and The Bush theatre group will all be bringing their repetoire to Latitude this year, some of it bespoke for their surroundings.

This year will also see the Britten Sinfonia performing in the lush outdoor space.