The Police Kick Off Reunion Tour

Sting and co play to a sell out crowd in Vancouver 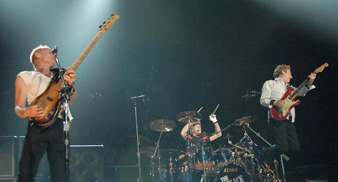 The Police kicked off their first US show in 21 years last night at the General Motors Palace in Vancouver.

Sting, Andy Summers and Stewart Copeland announced their highly anticipated reunion at the 49th Grammy Awards in Los Angeles in February, and have since sold-out shows around the world.

At the first of two shows in Vancouver, the band who are celebrating their 30th anniversary this year, played a two-hour set of their greatest hits, starting with their 1979 number one hit “Message In A Bottle.”

Synchronicity II
Don’t Stand So Close to Me
Voices Inside My Head
When the World Is Running Down
You Make the Best of What’s Still Around
Spirits in the Material World
Driven to Tears
Walking on the Moon
Truth Hits Everybody
Every Little Thing She Does Is Magic
Wrapped Around Your Finger
The Bed’s Too Big Without You
Murder by Numbers
De Do Do Do, De Da Da Da
Invisible Sun
Walking in Your Footsteps
Can’t Stand Losing You
Roxanne
King of Pain
So Lonely
Every Breath You Take
Next to You

The Police’s reunion tour continues across North America, before starting the European leg in Stockholm, Sweden on August 29.

The trio are scheduling new shows for the itinerary all the time, and the two latest announcements are an additional show at New York’s Madison Square Gardens on October 31 and one at Boston’s TD Banknorth Garden on November 11.

Tickets for both shows will go on sale next Monday, June 4.

To coincide with the anniversary shows, a Greatest Hits collection “The Police” is to be made available on June 11 through A&M Records.

Check out the band’s official website here for backstage photos, stories and more