We’re all still reeling from the shocking news of Lou Reed’s death on Sunday. Reading through the tributes that have poured in over the last few days, the one that’s resonated most with me came from John Cale, who in his wise and moving testimonial to his old sparring partner, wrote: “we have the best of our fury laid out on vinyl, for the world to catch a glimpse”. We’ll be running out own full tribute to Lou in a future issue of Uncut. 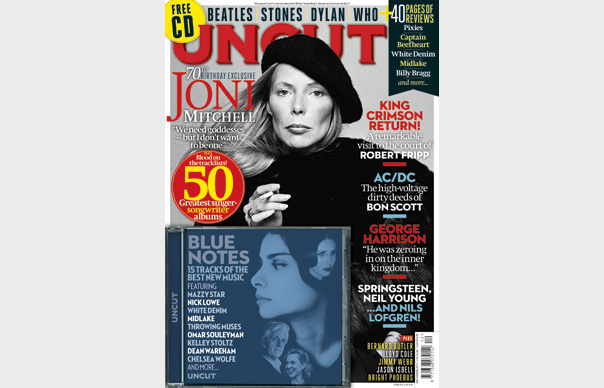 We’re all still reeling from the shocking news of Lou Reed’s death on Sunday. Reading through the tributes that have poured in over the last few days, the one that’s resonated most with me came from John Cale, who in his wise and moving testimonial to his old sparring partner, wrote: “we have the best of our fury laid out on vinyl, for the world to catch a glimpse”. We’ll be running out own full tribute to Lou in a future issue of Uncut.

And in case you missed it, I do recommend you spend a few minutes watching this terrific clip of Neil Young, Elvis Costello and Jim James covering the Velvets’ “Oh! Sweet Nutin'”. Personally, I think it’s a great, spirited celebration of one of Lou’s best songs.


Meanwhile, onto the new issue, which goes on sale today. Our cover star is Joni Mitchell, who on the eve of her 70th birthday discusses her remarkable career – from her days at art school in Calgary to her incredible successes in the 1970s, and much more besides. We also speak to David Crosby, Graham Nash and LA Express guitarist Robben Ford about their life and times with Joni. And with Joni on the cover, how could we resist supplementing the interview with our pick of the 50 most heart-breaking confessional records ever, from Tim Hardin to Laura Marling.

Elsewhere in the issue, Robert Fripp reveals to David Cavanagh his reasons for coming out of retirement to relaunch King Crimson – he also tells us about life in Crimson’s heyday, exactly when David Bowie last requested his services, and how he ended up on Mr & Mrs. We also celebrate 40 years since AC/DC formed with a terrific piece on the mighty Bon Scott, whose colourful life and times are told here by Peter Watts with help from many of those who knew him best. Nils Lofgren talks us through his many career peaks in Album By Album, from his wonderful collaborations with Neil Young and Bruce Springsteen to his own solo albums. We also speak to the many eyewitnesses who were on hand for the recording of George Harrison’s “My Sweet Lord” in our Making Of… feature. In An Audience With…, Lloyd Cole answers your questions on subjects as wide-ranging as his golf handicap, the last time he met Morrissey, and his male grooming tips, and Jimmy Webb reveals the platters that matter most to him in My Life In Music.

There’s a weight of new albums under scrutiny in our reviews pages including White Denim, Midlake, Jason Isbell, Willie Nelson and Nick Lowe, as well as reissues from – deep breath – The Beatles, The Kinks, The Who, Captain Beefheart and Bob Dylan. We also review DVDs from Gene Clark and The Rolling Stones, plus new films including Jude Law in Dom Hemingway, Sandra Bullock and George Clooney in Gravity and Cannes winner Blue Is The Warmest Colour. We also look at Graham Nash’s memoir in our books section.

In a typically busy Instant Karma! this month, legendary lensman Gered Mankowitz reveals the stories behind some of his most famous photographs – including Keith Richards and Eric Clapton. Kaleidoscope – Britain’s unluckiest psych band – are on hand to tell us their marvellous story, and we take a peek at a new book celebrating the art of punk 7” sleeves. We also speak to Bernard Butler about his latest endeavour, the Krautrocking world of Trans, and give a warm welcome to Chris Forsyth, a former student of Richard Lloyd whose album Solar Motel has been a regular fixture on the Uncut office stereo.

Oh, and eagle-eyed readers may spot a teaser or two about the next instalment of our next Ultimate Music Guide…

That, I think, is pretty much that. We hope you like the new Uncut – and, as ever, do drop Allan a line to let him know what you think: Allan_Jones@ipcmedia.com.