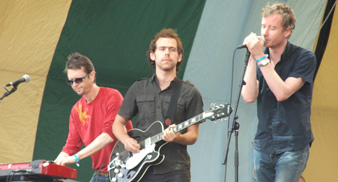 US indie band The National have announced an extra show in London next month.

They will now play a second night at London’s Shepherd’s Bush Empire on November 8, in addition to their previously announced show on the 7th.

The band have been touring the US since the release of ‘The Boxer’ album for Beggars Banquet in May this year. The band fronted by Matt Berninger have performed only four shows in the UK this year, including a great show at the Latitude Festival this July.

Catch the band at the following venues next month: