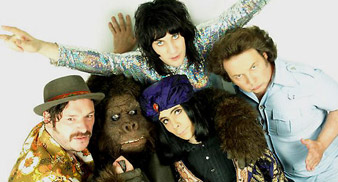 The Mighty Boosh are amongst the first artists announced for this year’s Big Chill festival.

Legendary DJ Norman Jay and the Thievery Corporation have also been confirmed for the festival which takes place from August 1-3 at Eastnor Castle Deer Park in the Malvern Hills.

The ICA, Roundhouse, and the British Film Institute are amongst the confirmed partners for this year’s event.

Information about the Big Chill and tickets are available from: www.bigchill.net/festival.html

Meanwhile, the cast of ‘The Mighty Boosh’ will be signing DVD copies of the third series of the show at HMV Oxford Street next Monday (February 11).

Noel Fielding and Julian Barratt will be at the store from 12.30pm, along with Rich Fulcher (Bob Fossil), Dave Brown (Bollo) and Mike Fielding (Naboo).