The Kids Are Disunited 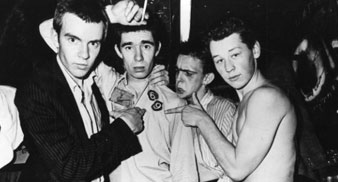 Punk veterans Sham 69 are in disarray after the band, including original guitarist dave Parsons, acclaim to have “left”, singer and founding member Jimmy Pursey…

Sham never achieved the iconic status of punk legends like The Sex Pistols and The Clash – and were often at the centre of violent scenes at gigs that made them unpopular with many punk fans – but scored a succession of hits between 1977 and their split in 1980, among them “Angels With Dirty faces”, “If The Kids Are United” and “Hurry Up Harry”.

Pursey put together a new line-up of the band in 1987, although they never achieved anything like their former popularity.
A statement from the band’s management said: “Sham 69 have left Jimmy Pursey on the eve of their 30th anniversary. The band had become increasingly fed up with Jimmy’s lack of interest in playing live and continually letting down both promoters and fans by pulling out of gigs at the last moment.

“Original guitarist and co-songwriter Dave Parsons, and Ian Whitewood, drummer with Sham for the last 20 years, are continuing as Sham 69. They have just recruited a new bass player and will shortly be auditioning singers.”

Pursey hotly denied that he had ever let the band or fans down, and blamed the split on his decision to re-record “Hurry Up Harry” with former Blur guitarist Graham Coxon for the 2006 World Cup.

He vowed never to play again with his former band mates and promised to retain the name of Sham 69, which was also claimed by Parsons.

He also promised there would be a new Sham album – which the group had been working on for the last five years – released very soon.