The Hold Steady Bring Their Bar Room Party To Reading 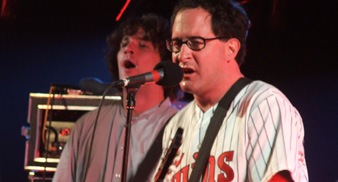 The Hold Steady have just finished playing to a small but devoted crowd over at the Carling Stage at Reading (August 26).

With a headline slot clash with the epic-scale Smashing Pumpkins and an incredibly over-subscribed Klaxons over at the NME/ Radio 1 stage, Craig Finn and the crew still packed a punch.

Starting mass clap-alongs and causing a scene reminiscent of a Southern US bar – songs like ‘Chips Ahoy!’ , ‘Stuck Between Stations’ and ‘Southtown Girls’ were all fantastic spirit lifters for the last hours of the three day bash.

Introducing songs and chatting to the fans throughout, Craig Finn’s banter was refreshing after some groups were lacking in audience interaction this weekend.

Ending with a killer ‘Killer Parties’ – the Hold Steady brought a certain freshness to end proceedings for this year’s Reading festival.

Check the Uncut Festival’s Blog to catch up with what we’ve caught this year here.