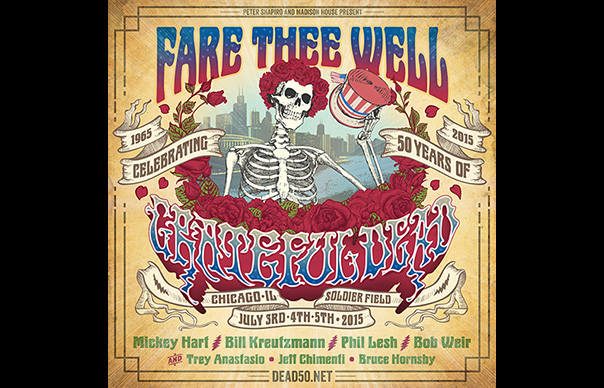 The Grateful Dead have announced they are to reunite to celebrate their 50th anniversary with three gigs.

The shows, dubbed Fare Thee Well: Celebrating 50 Years of Grateful Dead, will take place at Chicago’s Soldier Field on July 3, 4 and 5, nearly 20 years to the day of the last-ever Grateful Dead concert, which took place at the same venue.

“It is with respect and gratitude that we reconvene the Dead one last time to celebrate – not merely the band’s legacy, but also the community that we’ve been playing to, and with, for fifty years,” said bassist Phil Lesh in a statement. “Wave that flag, wave it wide and high…”

Lesh will be joined by guitarist Bob Weir and percussionists Mickey Hart and Bill Kreutzmann. Speaking to Billboard, Bob Weir confirmed, “These will be the last shows with the four of us together.”

They will be joined by Phish’s Trey Anastasio along with pianist Bruce Hornsby and keyboardist Jeff Chimenti.

The band will perform two sets of music each night.

You can find more information about ticket availability here.