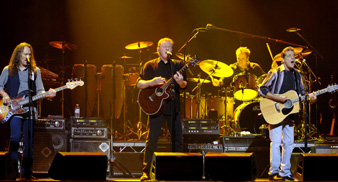 The Eagles have beaten Britney Spears to the UK album chart top spot, with their first new studio album in 28 years.

The album ‘Long Road Out Of Eden’ also marks the California rockers first UK number one in 33 years, since their debut ‘On The Border’ was a hit in 1974.

The famously feuding band have played a couple of intimate shows to launch the album, one in Los Angeles and one in London last week.

The Eagles success means that the week’s other big comeback album, ‘Blackout’ from troubled pop princess Britney Spears went into the charts at number 2.

Elsewhere in the UK album chart – Van Morrison hangs in the top 10, at number 8, after scoring his highest ever chart placing last week with ‘Still On Top- The Greatest Hits’.