The Dirty Three To Play The Capital 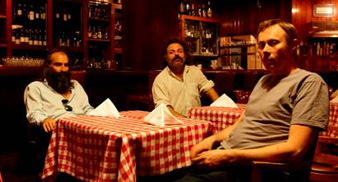 Legendary Australian instrumentalists The Dirty Three will be playing their only London concert of the year next month.

The band, led by Bad Seed and Grinderman violinist Warren Ellis, are to take the stage at the Queen Elizabeth Hall on Monday 7th December, with former Lift To Experience frontman Josh T Pearson in support.

Since releasing the critically acclaimed Dirty Three album ‘Cinder’ in 2005, Ellis has been busy providing soundtracks to ‘The Assassination of Jesse James by The Coward Robert Ford’ and the forthcoming adaptation of Cormac McCarthy’s ‘The Road’ with Nick Cave, whilst fellow member Jim White has kept busy playing drums with Bonnie Prince Billy and Bill Callahan, amongst others.