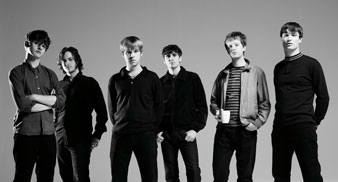 In fact both a Noel and Liam were in the audience, but not the ones fans might have immediately thought of.

Former Oasis leader Noel Gallagher was in the crowd for the gig, fresh from returning from watching the World Cup final in South Africa, while The Courteeners frontman Liam Fray was also in town for the show.

However, there was a mini-Oasis reunion of sorts – Gem Archer showing up with Gallagher to watch the show.

The Coral showcased a host of tracks from ‘Butterfly House’, which was released on Monday (July 12).

Speaking little, except to thank the packed crowd for their support, the band played the likes of ‘Walking In The Winter’, ‘Green Is The Colour’ and the title track.

They also included several crowd favourites like ‘Simon Diamond’, ‘Pass It On’ and ‘Dreaming Of You’.

The band are now set to play this weekend’s Latitude Festival on Sunday (July 18).