The Steve Albini-produced “Mountain Battles” is out in April 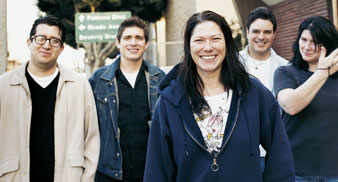 The Breeders, led by Pixies bassist Kim Deal, are set to release a new album after a seven year wait.

“Mountain Battles”, out on April 7, features the same line-up who performed on 2001’s “Title TK”, including Deal’s sister Kelley on guitar.

The album was in part recorded by legendary producer Steve Albini and recorded in Chicago and Dayton, Ohio.

The Breeders head to Europe after “Mountain Battles”’ release, calling at: