The Blockheads To Release New Album 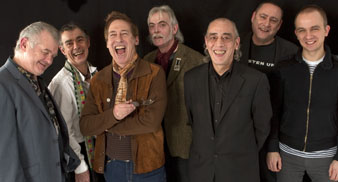 The Blockheads will release a new album on April 6. Entitled ‘Staring Down The Barrel’ it will be the group’s second release since frontman Ian Dury passed away in 2000. Original members Chaz Jankel, Mick Gallagher, Norman Watt-Roy and Johnny Turnbull all feature on the release with vocal duties taken by Dury’s infamous friend and minder Derek The Draw.

To celebrate the release the band will begin a 14-date UK tour on 1st April, with a London show on 30th April, where they’ll be joined by original saxophonist Davey Payne.