The B52s Update Their Sound For New Album 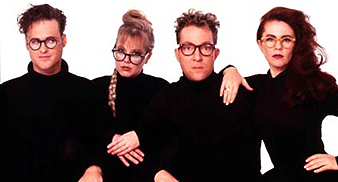 B-52s vocalist Fred Schneider has confirmed to an Atlanta newspaper, that the group are halfway through making their seventh studio album.

The group have been working on the album for several months, and alluded to it when they pulled out of playing London’s Wireless festival last June, because of “studio commitments.”

The B-52s whose most popular tracks include “Roam” and “Love Shack” from 1989’s “Cosmic Thing” are recording their new material -“a mixture of rock songs and dance songs”- at Nickel And Dime Studios.

Although the band members now live in New York, they have returned to their origins to make the new record.

The singer told The Atlanta Journal, “This is where we started, so it just feels right to be making this record here. We’ve loved recording at Nickel And Dime Studios, too. There are no distractions there. Once you’re in Avondale, you’re in Avondale. I love the Salvation Army there. I’ve found some great records there.”

On The B-52’s website – Schneider and singer Kate Pierson have answered fan’s questions about the forthcoming record.

Asked about recording after such a long period of time apart, Pierson explains how they are finding wiorking together again. She says: “The recording process is different these days with digital technology. But Keith wrote the music then Cindy, Fred and I “jammed” in our usual process of trying to make things flow. Then we listen and try to make sense of it all. We may pick out a chorus, then go for the verses. Or we might get a beginning and go from there. But we all participate in the process. Keith wrote some killer music and massive grooves making it fun to jam and come up with crazy ideas

The B-52s anticipate the as-yet-untitled album will be ready for a Summer release, with a tour to follow.