Syd Barrett ‘The Madcap Laughs’ photos to be sold for charity

Iconic Mick Rock shoot is up for auction this month 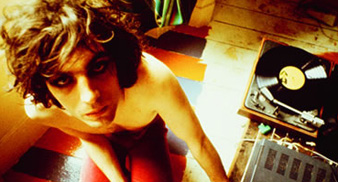 Photographs of former Pink Floyd front man Syd Barrett are to be sold at auction this month in London.

Taken by legendary snapper Mick Rock, the three photos of Syd Barrett were taken during the shoot for his solo album ‘The Madcap Laughs‘ in 1969.

Two of the Rock photos are B&W, 51 x 60cm, one a close up head shot and one of Syd on a car bonnet. The third, larger at 112 x 76cm, in colour, has Syd sitting on the floor of his Earls Court flat, accompanied by a record player – pictured above.

Viewing of the music sale at the the Phillips de Pury Gallery in London begins on November 9, with the auction taking place on November 21.

Half of the money raised will go to the Syd Barrett Fund, which supports arts projects which better mental wellbeing. The fund eventually plans to open the Syd Barrett Centre for Social Arts in Cambridge.

To see the catalogue or make a bid, see the gallery website here:www.phillipsdepury.com