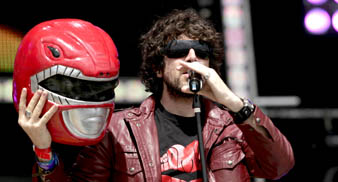 Super Furry Animals closed the second day of Dorset’s End Of The Road with a stunning hit-laden set tonight (September 15).

The Welsh psychedelic rockers were nearly half an hour late coming on stage and battled through some early technical problems, but still managed to perform well-received versions of “Do Or Die”, “Ice Hockey Hair” and “Northern Lites”, among others.

The opening “Slow Life” saw singer Gruff Rhys performing the song in his customary Power Rangers helmet, before the band launched into popular singles “(Drawing) Rings Around The World” and “Golden Retriever”.

Tracks including “Show Your Hand” and “Into The Night” were also showcased from the group’s new “Hey Venus!” album, while at one point Rhys led the crowd in singing “Happy Birthday” in Welsh to guitarist Bunf, who was also presented with a cake topped with model Clangers.

End Of The Road continues tomorrow (September 16), with sets from Lambchop, Euros Childs and James Yorkston.

Stay with the Uncut Festivals blog for more news and reviews from End Of The Road here.