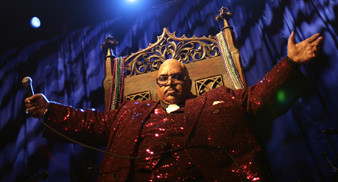 Clapton has written the title track for Burke’s forthcoming album ‘Like A Fire’ as well as sharing songwriting credits with Burke on the song “Thank You.”

Other artists who have worked, written and played on the new album, out next month (June 16) include Ben Harper, Jesse Harris and Keb’ Mo.

Speaking about making his new album, Burke, who’s now 68, says: “I’m on a journey, and that journey is music. I want to give all I can to as many people as I can for as long as I can.”

Adding that the songs are always emotional, he says: “Songs take a message directly to your heart. When you can’t speak for yourself, sometimes a song can say something in three minutes that you’ve been trying to say all your life.”

Solomon Burke plays two UK dates this year, at Glastonbury Festival on June 29 and at London’s Barbican on July 3.