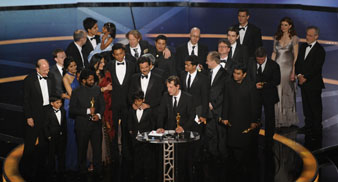 ‘Slumdog Millionaire’ swept the board at last night’s (February 23) Oscars ceremony; winning all but one of the nine categories it was nominated for, including Best Film, Danny Boyle as Best Director, Best Score, Best Cinematography and Best Adapted Screenplay.

“There are certain places you never imagine standing,” said Simon Beaufoy picking up the award for Best Adapted Screenplay, “the moon, the South Pole, the Miss World podium and here.”

Kate Winslet won Best Actress for her role in ‘The Reader’. “I’d be lying if I haven’t made a version of this speech before,” said Winslet. “I think I was probably eight years old and staring into the bathroom mirror and this would have been a shampoo bottle. Well it’s not a shampoo bottle now.”

As widely expected, Heath Ledger was posthumously awarded Best Supporting Actor for his role as The Joker in ‘The Dark Knight’. Picking up the award Ledger’s father Kim said: “This award tonight validated Heath’s quiet determination to be truly accepted by you all here, his peers, in an industry that he so loved.”

One of the only surprises of the night came when Sean Penn picked up the Oscar for Best Actor ahead of Mickey Rourke, who had been tipped to win. “Well, you commie, homo-loning sons of guns,” joked Penn who won the award for playing Harvey Milk in Gus Van Sant’s biopic ‘Milk’. “I did not expect this, and I want it to be very clear that I do know how hard I make it to appreciate me, but I am touched by the appreciation.”

‘Milk’ was also awarded Best Original Screenplay. Picking up the award screenwriter Justin Lance paid tribute to the late Harvey Milk. “If Harvey had not been taken from us 30 years ago, I think he’d want me to say to all those gay and lesbian kids out there tonight – who have been told that they are less than by their churches, by the government, or by their families – that you are beautiful, wonderful creatures that are valued.”