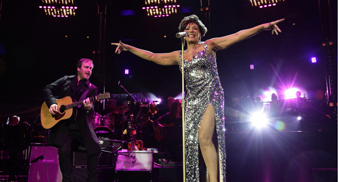 Dame Shirley Bassey delivered an amazing performance backed by the BBC Concert Orchestra, at her Electric Proms show in London on Friday (October 23).

Celebrating a 50-year career, as well as debuting several new tracks from forthcoming album ‘The Performance’, Bassey went down a strorm with the audience, who called her name throughout and threw roses at the stage.

Collaborators on her first album in 20 years joined Bassey on stage at the Roundhouse, nicknamed by her as her “toyboys”. Album producer and James Bond soundtrack composer David Arnold joined Shirley playing guitar on the Rufus Wainwright-penned track, the jaunty “Apartment”.

Richard Hawley who was Bassey’s opening act, returned to the stage to join her for “After The Rain” – the song he penned for her new album.

Bassey also managed to fit in a cover of The Beatles‘ “Something” and “Lght My Fire By The Doors, between a glorious set that showcased her entire career.