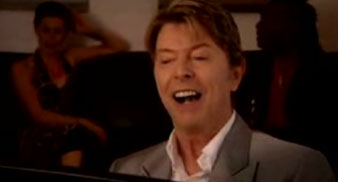 Bowie improvs a hilarious song inspired by Ricky Gervais’ Extras character Andy, with the lyrics running something like:

Pathetic little fat man, no one’s bloody laughing, the clown that no one laughs at, they all just wish he’d die.
He’s so depressed at being useless, the fatman takes his own life.”

Bowie appeared in Extra: Season 2, and other brilliant cameos in the acclaimed series include Coldplay’s Chris Martin and Hollywood actors Ben Stiller and Samuel Jackson.

Extras: Season 2 is available to buy on DVD from March 26.