Plus Wild Beasts, Beth Rowley and Captain on the Uncut stage 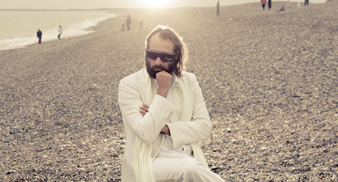 Sebastien Tellier won over a new army of fans with a classy performance at the Uncut Arena this afternoon (July 19).

The huge tent was filled to capacity twenty minutes before Tellier arrived on stage at 16:30 BST.

Tellier’s set opened with his new material from his latest album Sexuality released earlier this year.

After opening with a synth heavy version of “Fingers of Steel” he played his Eurovision entry song, “Divine” prompting a huge cheer from the crowd.

Looking like he was just getting into his stride he joked to the audience, “You’re very nice people but so fat and ugly,” before launching into “Sexual Sportswear”.

Warming up for Tellier, Captain played a short set to a group of loyal fans who clapped and sang along throughout their performance.

After opening with “Echoes of Fashion” and “Frontline” the keyboardist Clare Szembek revealed that their lead guitarist was something of a catch.

“Our Greek is listed in the top 50 most eligible bachelors in the whole of the UK in the latest issue of company magazine,” she giggled, referring to Mario Athonasiou. The band then went into their best known hit “Glorious”.

The Uncut Arena has proved a popular choice today with full crowds for every act this afternoon from opening band Golden Silvers, Beth Rowley and Wild Beasts, who played one of the best sets of the festival so far.

For more live coverage of Latitude Festival, stay tuned to Uncut.co.uk and read the Latitude blog.