Rush To Give First Interviews In Over 20 Years

Geddy Lee, Alex Lifeson and Neil Peart all speak to Planet Rock from this Sunday 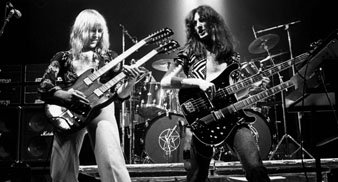 All three members of epic Canadian rockers Rush are to give their first exclusive interviews in the UK for over 20 years, from this Sunday (September 2).

Speaking to digital radio station Planet Rock, Rush – who have sold over 25 million records worldwide, since their self-titled prog debut ‘Rush’ in 1974- will take it in turns to speak in weekly installments every Sunday.

The first interview is with drummer Neil Peart – he talks about his love of Keith Moon and how he comes up with the band’s lyrics.

Guitarist Alex Lifeson next week (Spetember 9) will be talking about his first attempts at forming a band with Geddy at school, upto the moment he finally met his hero, Jimmy Page.

The highlight of the interviews is Geddy Lee‘s most revealing in years. In the third part of the Rush interviews, he will talk through the different phases of the band, including the immediate effect Neil’s arrival had after the departure of John Rutsey, the band’s original drummer.

The grand finale – involving all three members of the band – takes place on September 23 – where the interview will concentrate on the making of Rush’s eighteenth studio album ‘Snakes And Arrows‘ – their first since 2002’s ‘Vapor Trails.’

To tune into the interviews – Planet Rock is available on DAB Digital Radio, Sky Channel 0110, Cable Channel 924 and Online at www.planetrock.com.