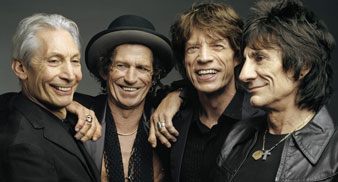 The Rolling Stones’ Mick Jagger and Keith Richards have paid tribute to blues guitarist Hubert Sumlin, who has passed away aged 80.

The pair paid their respects to Sumlin, who enjoyed a career that spanned 40 years – including nearly two decades playing guitar with the singer Howlin’ Wolf and a stint with Muddy Waters – before he died from heart failure earlier this week (December 4).

Richards, who featured on Sumlin’s 2004 solo LP ‘About Them Shoes’, said: “With sorrow I received the news of Hubert’s passing. He put up a long hard fight. To me he was an uncle and a teacher, and all the guitar players must feel the same as myself.”

He went on to add: “Warm, humours and always encouraging, he was a gentleman of the first order. Miss him, yes, but we have his records. All my condolences to his family”.

Jagger, meanwhile, said: “Hubert was an incisive yet delicate blues player. He had a really distinctive and original tone, and was a wonderful foil for Howlin’ Wolf‘s growling vocal style.

“On a song like ‘Going Down Slow’ he could produce heart rending emotion, and on a piece like ‘Wang Dang Doodle’, an almost playful femininity. He was an inspiration to us all.”

Sumlin, who was nominated for a Grammy award on four separate occasions but never won the prize, was inducted into the Blues Foundation Hall of Fame in 2008 and was also included in Rolling Stone‘s list of the 100 Greatest Guitarists Of All Time.

It was recently reported that Mick Jagger and Keith Richards were set to discuss plans for the 50th anniversary of the first Rolling Stones gig, which takes place on July 12 2012.