A Bigger Bang rolls in the cash for Jagger and co 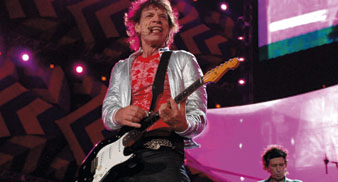 The Rolling Stones have topped a list of the highest earning musicians of the year so far.

The Stones who have just finished up their ‘A Bigger Bang‘ worldwide tour with three explosive sets at London’s 02 Arena – have managed to earn £43 million pounds this year in the process.

The musician’s earning list is drawn up annually by US business magazine Forbes, put the Rolling Stones top. Billboard magazine’s own list at the end of 2006 also ranked the Stones the biggest earners for this tour.

The full top 10 music earners according to Forbes is: