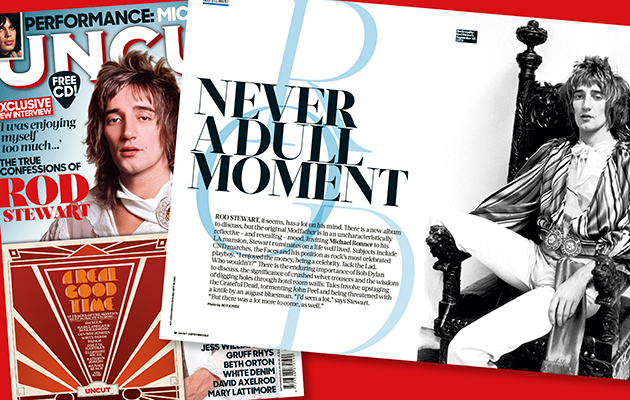 Talking exclusively in the new issue of Uncut – on sale now! – Rod Stewart reveals why his new album Blood Red Roses certainly won’t be his last.

“Oh, please!” he says, shooting down the suggestion. “You’ve got no idea! When I first started, none of us thought about fame. We just had to play and people listened – that was all we wanted. It’s still the same. Plus I’m a natural showoff! The audience is still there. Two nights, sold out, at the Hollywood Bowl. 15,000 a night. I’d be a mug to give it up.”

Blood Red Roses is Stewart’s third album in a row to be written largely in collaboration with Kevin Savigar, whom he credits with reigniting his passion for songwriting after the American Songbook series. “I had writer’s block. I became a lazy git. No, maybe it wasn’t that. I didn’t have a foil. I couldn’t find anyone I wanted to write with until Kevin Savigar came along. He’s brilliant. We could go on and on writing songs for years.”

Asked if he’d ever be tempted to make a sparse and intimate record along the lines of Robert Plant and Alison Krauss’s Raising Sand, Stewart says: “Yeah. But not yet. I’ve still got a lot of rocking stuff to be done. I’ve thought about getting a girl to sing with me on those kind of stripped back ballads. I know the record company want me to do it. But I need to find a girl I think I can sing with – Bonnie Raitt would be great – and the songs come and they’re all in that vein and they can all be interpreted, then I’ll do it. And it will happen.”

Read much more from Rod in the new issue of Uncut, in shops now or available to buy online – with no delivery charges – here.