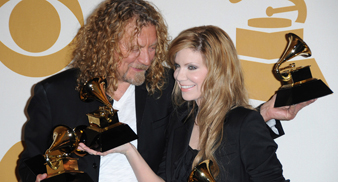 The duo’s wins included beating the likes of Coldplay and Radiohead to pick up Album Of The Year, Record Of The Year for “Pease Read The Letter” at the 51st Annual Grammy Awards ceremony.

“I’m bewildered,” remarked Plant, “in the old days we would have called it selling out but now it’s a good way to spend a Sunday.”

T Bone Burnett as producer and Mike Piersante as engineer/mixer also received Grammys for Record of the Year and Album of the Year for ‘Raising Sand.’

“Thank you so much,” said an emotional Adele accepting the Best New Artist award from fellow Brit Estelle, “I’m going to cry.”

Coldplay won Best Rock Album and Song Of The Year. Decked out in a lurid, Sgt Pepper-style military jacket Chris Martin thanked the audience for the recognition:“We have never had so many Grammys in our lives. I feel so grateful to be here, I’m going to tear it up. Thank you so much.”

Earlier in the evening Martin duetted with Jay-Z on a version of Coldplay’s Lost, before performing Viva La Vida with the rest of the band. The ceremony was opened by U2 playing a new Song entitled “Get On Your Boots” and featured a performance of 15 Steps by Radiohead.