The Beatles’ drummer chopped out of topiary artwork 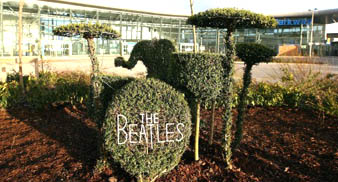 Vandals in Liverpool have decapitated a hedge sculpture of Ringo Starr but left the other members intact.

There is speculation that an unfortunate comment from Ringo on Jonathan Ross’s BBC chat show in January could have provoked the attack.

Ringo, who appeared on the show a week after launching Liverpool’s celebrations as the European Capital of Culture, told Ross he missed ‘nothing’ about the city.

A station worker told The Mail on Sunday it was the second time the artwork had been damaged.

“Last time someone squashed Ringo’s head but this time the head has been completely cut off. Whoever did it must have come armed with cutting equipment.”

The head has still not been found.