Plus! Willy Vlautin's personal track-by-track guide to the LP 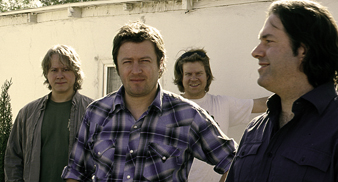 Richmond Fontaine are set to release a new album, called We Used To Think The Freeway Sounded Like A River on August 17, and will tour the UK in September to promote it.

The follow-up to 2007’s Thirteeen Cities, the new 14-track album is produced by Calexico‘s JD Foster, with all lyrics written by RF frontman and author Willy Vlautin.

A 7” single “You Can Move Back Here” will be released on July 20, a day after Vlautin plays a solo set at this year’s Latitude Festival.

Vlautin’s own track-by-track guide for We Used To Think The Freeway Sounded Like A River reads as follows:

1) “We Used To Think The Freeway Sounded Like a River” – Living next to an abandoned house that once had a grand swimming pool, the romance of a couple having their first place, and the romance and cost of living in a bad neighborhood.

4) “The Boyfriends” – A mom’s series of boyfriends and the kid who has to see them. Features trumpet by Mr. Paul Brainard.

5) “The Pull” – The anxiety and struggle of trying to stay sober. The man in it is so angry and hopeless that he begins boxing, and it works until he gets hurt then it’s taken away as well.

10) “Lonnie” – Running into your friend’s aunt at Safeway and having her give you a list of all the horrible things her nephews has done.

11) “Ruby and Lou” – A romance and a couple believing there’s a place where the darkness of the world doesn’t exist. The Portland room they get is at the St. Francis Hotel. It’s where Drug Store Cowboy is set and is where I used to stay when I visited Portland.

13) “Two Alone” – In a new town with a job as forklift driver and a pregnant girlfriend who loves credit cards and doesn’t have a job.

14) “A Letter To The Patron Saint of Nurses” – A nurse having a nervous breakdown while drinking wine coolers and listening to Mariachi music.