On the day the new Verve album's released, too 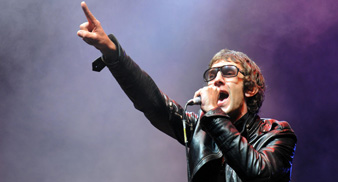 Following The Verve’s headline shows at the V Festivals this past weekend, Richard Ashcroft has been confirmed to play a solo show next Monday (August 25).

Ashcroft will appear at the Last Days Of Summer festival in Northampton, on the day that The Verve’s “Forth” album hits the shops. Ashcroft recently claimed that his solo career would continue in parallel to his Verve business.

However, the past week has seen plenty of gossip suggesting that the band are on the verge of splitting again, with differences between Ashcroft and guitarist Nick McCabe again allegedly coming to the fore.

Meanwhile, at the Last Days Of Summer, Supergrass, Black Kids and Young Knives are also scheduled to appear.