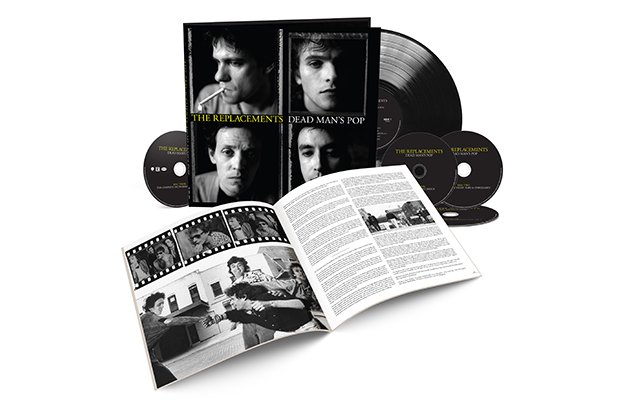 The centrepiece of the package is a stripped-down version of their 1989 album Don’t Tell A Soul, which the band always regarded as too slick.

Dead Man’s Pop features a newly completed mix of the album by Don’t Tell A Soul producer Matt Wallace, based on his 1988 Paisley Park mix; a disc of unreleased recordings, including a session with Tom Waits; plus the band’s entire June 2, 1989 show at the University of Wisconsin-Milwaukee. In total, the box includes 60 tracks, 58 of which have never been heard before.

Presented in a 12×12 hardcover book – loaded with dozens of rarely seen photos – the box set features a detailed history of the Don’t Tell A Soul era written by Bob Mehr, who also wrote Trouble Boys: The True Story of the Replacements.

Mehr writes: “While it’s impossible to unhear a record that’s been around for three decades, Don’t Tell A Soul Redux is the album the band made and intended to release. In addition to Matt Wallace’s mix, Redux also restores several crucial elements from the sessions, including original drums tracks, vocal takes and tempos that were altered in post-production… [and] the band’s original sequence of the album.”

Wallace says: “The true spirit of The Replacements was always there on the recordings we did back in 1988, and now you can hear and feel it clearly… This was the project of a lifetime for me when we recorded it 30-plus years ago, and it’s even truer today as we’ve finally fulfilled our original vision.”

Check out the tracklisting below and pre-order Dead Man’s Pop here, where the first 500 purchasers will also receive a 14-track cassette featuring highlights from the box along with two additional unreleased tracks: the outtake “Asking Me Lies” and an instrumental of “I Won’t” (Bearsville Version). The cassette also features the original, unused cover art for Don’t Tell A Soul.